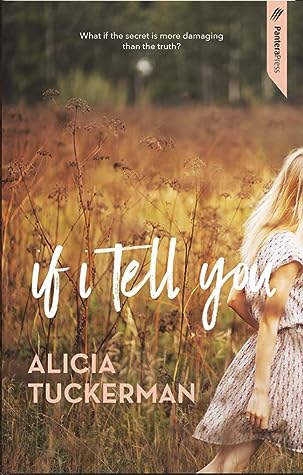 If I Tell You
Alicia Tuckerman
Pantera Press | March 2018
★★☆☆☆
17-year-old Alex Summers lives with a secret and the constant fear someone will find out. When Alex falls for Phoenix, there is no warning. In a small town with small minds, girls don’t go out with other girls, even if they want to.

Thank you to the publisher for providing me a copy of this book in exchange for an honest review.

I have very mixed feeling about this book.

I love the concept of an Australian, small-town story based on a lesbian MC. But so many other things in this book just weren’t comfy for me.

The trope closeted-lesbian-falls-in-love-with-new-out-lesbian-in-town is not something I enjoy. This is a trope that just feels cliche, for lack a better word. It feels very storytell-y and not realistic in my view. And when you add in a very rushed romance with questionable relationship tones (I will discuss further in a bit) it just felt a bit ick to me.

The relationship between Alex and Phoenix… it felt very unbalanced.

The pushiness from Phoenix about Alex coming out to friends and family, and even about performing on stage and sky-diving, all felt incredibly manipulative. At points it almost felt like a power play from Phoenix. There was very little consideration about Alex’s circumstances from Phoenix which frustrated me to no end.

I have seen a lot of reviews discuss the overuse of homophobia in this book. While I appreciate the upset and how damaging something like this can be, particularly if the book doesn’t forewarn about such content, this is something that I disagree with.

Every coming out story should have the opportunity to be told in detail, and as an #ownvoices LGBTQIA+ book this one is no different.

Absolutely, this book should come with strong trigger warnings, because the discrimination is very clear and poignant. But I don’t think the fact that it is hard to stomach is something that should result in erasure of this type of story-telling. This isn’t a story for everyone in this regard, but it is a story that should be told.

In saying that, I did not like the fact that the entire scene with Justin and his sister felt very unfinished and untouched. On top of that, Justin DOES out Alex to his sister, and no matter how small this outing it should not have gone untouched like it did. The story doesn’t present it as it is and is an act that should always be presented as not okay.

And then the ending. SIGH. I won’t go into spoilery details but THIS STORY HAS BEEN DONE BEFORE. Okay, so it isn’t a hetero couple and the details have been tweaked but I am not the only one to have seen that ending before and to be honest it felt like a cop out ending.

I am not crossing Tuckerman off my list, there are things like the concept and the writing style that I really enjoyed. But overall this wasn’t a book for me.